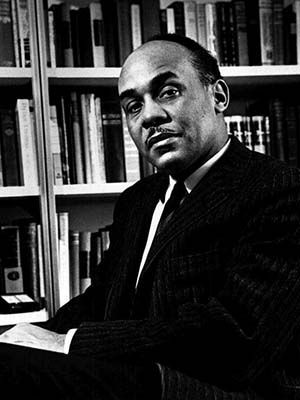 “This is a beautiful place. It looks like a small town, the food is good enough and I’ll like it here. I’m going to work hard to stay.”

Ralph Ellison was born on March 1, 1914 in Oklahoma City. He attended Tuskegee Institute, inspired by its founder Booker T. Washington, working various jobs on campus. While working at the library, he befriended fellow student Albert Murray, whose habit of folding books into his pockets greatly irritated Ellison. “What do you think this is, a pocket addition?” he quipped. Eager to pursue his interest in writing, Ellison moved to New York before his junior year at Tuskegee.

He began to write fiction and book reviews for New Challenge magazine and was active in the campaign to release the Scottsboro Boys. He tackled issues of early 20th century African-Americans in his 1952 novel Invisible Man, for which he received the National Book Award. He maintained contact with his Tuskegee friend Albert Murray, and his correspondence with Murray was published under the name Trading Twelves.

Ellison died of cancer in New York City on April 16, 1994. He wrote until the end, with a work underway at the time of his death. It was published posthumously in 1999 as the acclaimed novel Juneteenth.