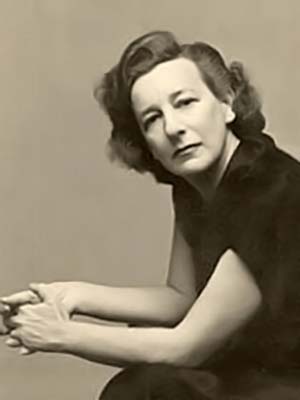 “I belonged, on my mother's side, to a banking, storekeeping family from Alabama and Sunday dinners were large, with highspirited talk and laughter from the older people of who did what to whom...”

Born in New Orleans in 1905, Lillian Hellman’s maternal roots were firmly entrenched in Demopolis, Alabama. Her great-grandfather Isaac Marx began building a business dynasty in Demopolis after settling there in 1844. Hellman spent many childhood days in Demopolis.

The community and its residents figured prominently in her plays The Little Foxes and Another Part of the Forest. The antebellum homes of Lyon Hall and Bluff Hall inspired the fictional home of Lionnet in The Little Foxes, while the dealings of the play’s fictional Hubbard family were said to have been inspired by her great-grandfather’s Marx Bank. Her plays caused some ill feelings and controversy in Demopolis and beyond. Fellow Alabaman Tallulah Bankhead starred in the 1939 Broadway production of The Little Foxes, though she and Hellman would have a falling out largely over political differences. Hailing from a politically prominent Alabama family, Bankhead was an outspoken opponent of the Communist Party, of which Hellman was a member from 1938-1940. Hellman would retain strong ties, however, to Margaret Tallichet Wyler of Demopolis. Wyler’s husband was the director William Wyler, who directed the screen adaptation of The Little Foxes.

Hellman’s legacy left an imprint on her mother’s hometown. Many of the sites which inspired Hellman can be found in today’s Demopolis, from Lyon Hall to Bluff Hall to the Marx Bank building. Demopolis embraces its rich literary and architectural heritage through an active arts community and the work of the Marengo County Historical Society.