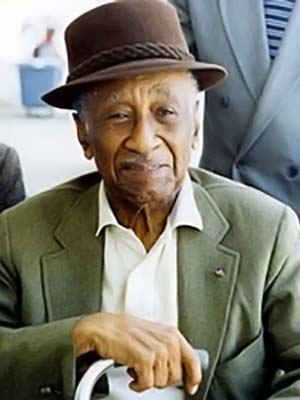 “The juke joint, the honky tonk, and the ballroom all represent one more things, anthropologically speaking: a ceremonial context for the male-with-female=duet dance flirtation and embrace, upon which the zoological survival of the human species has always been predicated.”

Albert Murray was born in the small community of Nokomis, Alabama in 1916 and would soon thereafter move near Mobile with his adoptive parents. Intelligent and curious, he thrived academically. He received a scholarship to Tuskegee, where his interest in the fields of music, particularly jazz, and writing grew. He became acquainted with another Tuskegee student, Ralph Ellison.

Following graduate studies and the University of Michigan and Northwestern, Murray returned to Tuskegee to teach English and literature. World War II interrupted his teaching career. Murray joined the Army Air Corps and later served in the Air Force Reserve. Again, he returned to Tuskegee to teach and direct the school’s ROTC program. After marrying and receiving his master’s degree from New York University, Murray remained in New York. It was here that he reconnected with his Tuskegee acquaintance Ralph Ellison and began to focus full time on his writing. In 1970 he published his first book, The Omni-Americans. The work was a collection of essays that focused on African-American culture and the African-American experience. Exploration of these topics allowed him to delve deeply into such aspects of African-American culture as dialect and music, with the latter being a strong focus.

Murray died in New York City in 2013, following an extraordinary career that spanned both writing and music. He was one of the founders of the acclaimed Jazz at Lincoln Center. Like fellow Southern writers, Murray drew from analyzing his own childhood, experiences, and observations. In Stomping the Blues, Murray exclaimed that blues music is not intended to be "synonymous with low spirits...Not only is its express purpose to make people feel good, which is to say high spirits, but in the process of doing so it is actually expected to generate a disposition that is both elegantly playful and heroic in its nonchalance." Murray could have been describing Mobile, an "elegantly playful" city with one of Alabama's most hospitable dispositions.